In the recent episode of 'Kaun Banega Crorepati 13', Amitabh Bachchan was seen blushing as he remembered his love marriage with Jaya Bachchan. 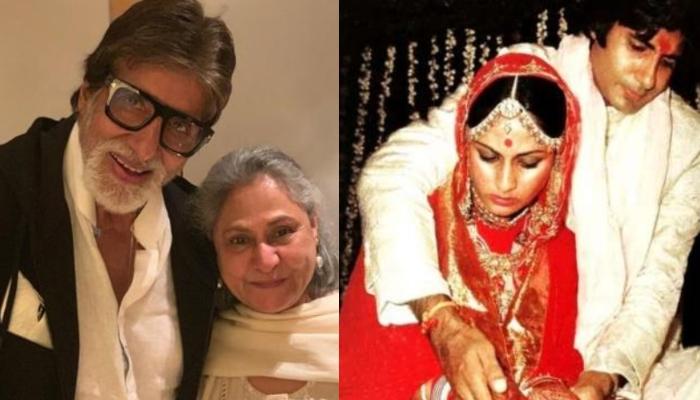 The iconic couple of Bollywood, Amitabh Bachchan, and Jaya Bachchan top the list of long-lasting couples. They had faced many tides in their relationship yet had sailed through all of them and had made it to the shore. It was in 1973 when the 'Angry Young Man' of Bollywood, Amitabh had broken the hearts of millions of girls and had married his ladylove, Jaya Bhaduri in chat mangni, pat vyaah.

Together for 48 years now, Amitabh and Jaya have been living their happy life with their daughter and son, Shweta Bachchan Nanda and Abhishek Bachchan, son-in-law and daughter-in-law, Nikhil Nanda and Aishwarya Rai Bachchan and grandchildren, Navya Naveli Nanda, Agastya Nanda and Aaradhya Bachchan.

Also Read: Mahesh Bhatt Heaps Praises On Daughter Alia Bhatt, Says She Made More Money Than Him In Just 2 Years

While revealing the difference between both, the contestant stated that although he had an arranged marriage, people thought that it was love. At that moment, Mr Bachchan recalled his own marriage to Jaya and said, "Dekhiye, humko toh maalum nahi hai arranged marriage hota kya hai. Kyuki…nai main." But before completing the sentence, Mr Bachchan was seen blushing as he turned around and hid his face.

Amitabh Bachchan had first met Jaya Bhaduri at Pune Film Institute in the year 1970. She was already a star while he was still making a foothold in the industry. Jaya was a perfect blend of modern yet traditional values and had perfectly matched Amitabh’s dream woman. Amitabh and Jaya had met officially on the sets of the movie, Guddi. The duo had fallen head-over-heels in love with each other.

It was on June 3, 2019, when Amitabh Bachchan, to mark his 46th wedding anniversary with Jaya Bachchan, had revealed an interesting story of the unusual circumstances and their chat mangni pat vyaah in his blog post. Co-stars of several films, including Chupke Chupke, Abhimaan, Bansi Birju, Sholay and many more, Amitabh Bachchan and Jaya Bachchan had wanted to go on a trip to London to celebrate the success of their film, Zanjeer along with their other friends. But Big B’s father, Harivansh Rai Bachchan had told him that he could go only with Jaya after the two get married. Amitabh and Jaya were dating at that time.

On the work front, Amitabh Bachchan's upcoming movies are Jhund, and Brahmastra!

Also Read: Gauri Khan Broke Down Into Tears After The News Of Aryan Khan's Bail, Fell On Her Knees And Prayed