Bigg Boss 15: Anusha Dandekar puts up cryptic posts after Karan Kundrra talks about their split inside the ho

Bigg Boss 15: Anusha Dandekar puts up a post on how people want relationships and love that only meets their own purposes in life Read now on BollywoodLife.com

Karan Kundrra has been making lot of news on Bigg Boss 15 because of his love life. We know that there have been many rumours of his ex Anusha Dandekar entering the show. Inside the Bigg Boss 15 house, Karan Kundrra said that he has a crush on Shamita Shetty as she reminds him of his former girlfriend. He also said that he went into an analytical mode after his break-up. He said that if they had sat down, communicated and tried to sort things out, maybe they did still be together. Anusha Dandekar has said that they broke up due to infidelity and she expected more honesty from her partner. Also Read - Bigg Boss 15: Do you feel that Tejasswi Prakash wants to isolate Karan Kundrra from the housemates? Vote Now

Now, Anusha Dandekar has put up a couple of cryptic posts about love. One of the Insta stories read, "Some people love you. Some love to be around you. Some love what you can do to them. Understand the difference." Some time back, she has put one more story about love. This post is even more cryptic. It is a quote that says, "He doesn't lie to you because the truth will hurt your feelings. He lies to you because the truth might provoke you to make choices that won't serve his interests." Also Read - Bigg Boss 15: Fees earned by Tejasswi Prakash, Karan Kundrra, Jay Bhanushali and other contestants per week will make your eyes pop 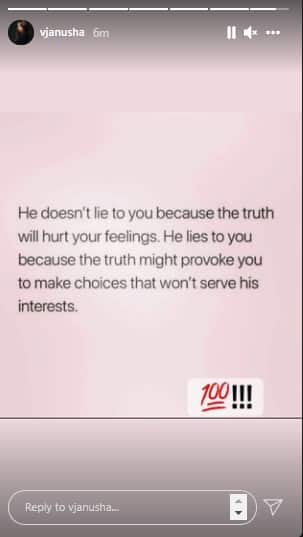 The two had been together for close to four years. There is an age difference of three years between the former couple. Karan Kundrra was earlier in a relationship with Kritika Kamra. Now, all eyes are on #TejRan. Tejasswi Prakash and Karan Kundrra's bonding is getting a lot of love from all viewers. Fans want to see them as a couple. On the other hand, a lot of people are saying it is a fake love story. Anusha Dandekar is now in a relationship with model-actor Jason Shah. She is also the host of MTV Supermodel.