Bigg Boss 15 will see a major fight in the upcoming episodes between Pratik Sehajpal and Jay Bhanushali. They cross limits and go on breaking Bigg Boss house property. 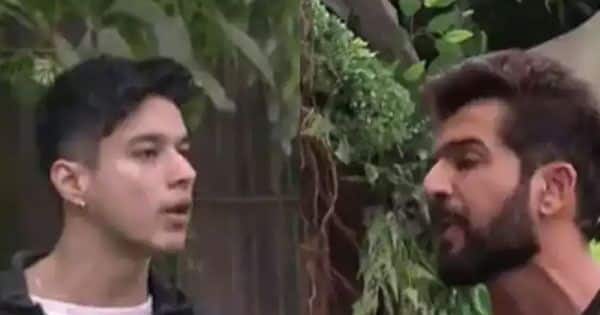 It has been two days since Bigg Boss 15 has begun and fans are already loving it. Jay Bhanushali, Tejasswi Prakash, Vishal Kotian, Karan Kundrra, Akasa Singh, Afsana Khan, Sahil Shroff, Simba Nagpal, Vidhi Pandya, Umar Riaz, Donal Bisht, Ieshaan Sehgaal, Meisha Iyer, Pratik Sehajpal, Shamita Shetty and Nishant Bhat are the participants this year. In just 2 days we saw so many fights and arguments taking place, especially with Pratik Sehajpal. He has been getting into fights since the first day he entered. Now, in the upcoming episode, we will see another big fight between Pratik and Jay. Also Read - Bigg Boss 15: From Jay Bhanushali to Karan Kundrra: Here's how much THESE contestants are charging per day for Salman Khan's reality show

In the promo, we see Bigg Boss announced a task wherein the 'Junglewasis' were given a map which will play an important role for them to survive in the jungle area in the next few days. Pratik Sehajpal decides to steal the map and hides it which leads to a major fight between Jay Bhanushali and him. Junglewasis go in the main house to search for the map. They pick up the sofa, blankets and beds in search of the map. While Jay is looking out for the map, Pratik stops him and a fight breaks out between them. Karan Kundrra shouts at Pratik for getting physical during the task while they all were calmly doing their work. Jay ends up abusing Pratik and the latter grabs him by collar. Also Read - Bigg Boss 15: Shamita Shetty misses her special connection Raqesh Bapat; Jay Bhanushali gives her tips to be a Maharashtrian wife

Jay Bhanushali complains to Bigg Boss about how dare he grab his collar and he refuses to follow orders. He even threatens Pratik to do such a thing in the outside world and again abuses him. Their fight goes out of hand when Pratik charges towards Jay Bhanushali again and again to hit him. Karan, Ieshaan, Nishant Bhat everyone tries to control Pratik but he doesn't stop and bangs the glass door of the house, which breaks. Also Read - Bigg Boss 15, day 1, October 4 LIVE UPDATES: Afsana Khan, Vidhi Pandya and Tejasswi Prakash's ugly catfight