Aryan Khan returned home at around 11:30 am today. It was a festive atmosphere outside Mannat with fans playing dhol, bursting crackers and waving banners with their messages for Shah Rukh Khan and Aryan Khan. 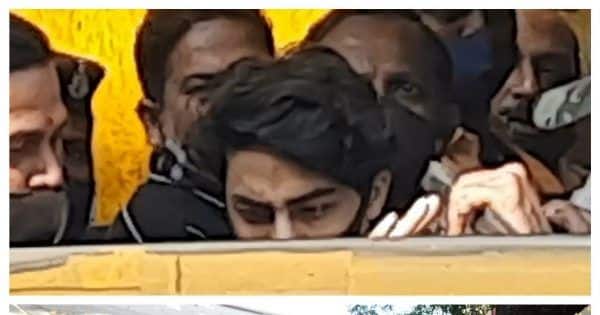 Shah Rukh Khan and Gauri Khan’s son Aryan Khan is out of jail. He was granted bail on Thursday by the Bombay High Court in the drugs-on-cruise case. However, he had to be in jail as the legal formalities were not complete. He returned home at around 11:30 am today. It was a festive atmosphere outside Mannat with fans playing dhol, bursting crackers and waving banners with their messages for Shah Rukh and Aryan. The fans have been parked outside Mannat for days following Aryan’s arrest. Also Read - Aryan Khan comes home: 5 ways in which Shah Rukh Khan won hearts while he fought for son’s freedom

Inside the house, a family friend informs us of the family reunion. “Shah Rukh Khan and Gauri Khan hugged him and tears wouldn’t stop. AbRam was happy to have his big brother back home, but he didn’t know why everyone was crying. He was obviously oblivious to what happened since October 2. Suhana, who is away, connected over video call and tears of joy flowed. It was a very emotional moment,” our source said. Also Read - Aryan Khan comes home: Shah Rukh Khan – Gauri Khan now open doors of Mannat for family and friends [Exclusive]

Meanwhile, Aryan’s bail lists down 14 conditions that Aryan will have to adhere to, which includes going to the NCB office every Friday between 11 am - 2 pm to mark his presence. He is also not allowed to go out of the country before prior permission from the court and out of Greater Mumbai without informing NCB. Aryan speint 28 days in custody and 23 days in jail. Also Read - Aryan Khan bail: Check out Shah Rukh Khan, Gauri, Suhana, AbRam, Pooja Dadlani’s First Reactions to the news of Aryan coming home

After his bail verdict on Thursday, we saw actors like R Madhavan, Swara Bhasker and others reacting. Taking to Twitter, R Madhavan wrote, “Thank god. As a father I am So relieved .. … May all good and positive things happen.” On the other hand, Sonu Sood also took to Twitter and wrote, “When time delivers justice, one doesn't need witnesses,” in Hindi. Swara Bhasker shared a tweet about Aryan's bail and said, “FINALLY !” Sonam Kapoor too shared a picture of Gauri Khan and Aryan, originally shared by Maheep Kapoor and wrote, “Finally.”