The gorgeousness, Mira Rajput Kapoor always shares jaw-dropping looks on her social media platforms, and this time she flaunted her 6 year old honeymoon pants. Video inside!
Mira Rajput Kapoor Flaunts Her Sassy Honeymoon Pants In Which She Fitted After 6 years

The gorgeousness, Mira Rajput Kapoor always shares jaw-dropping looks on her social media platforms, and this time she flaunted her 6-year-old honeymoon pants. Video inside! 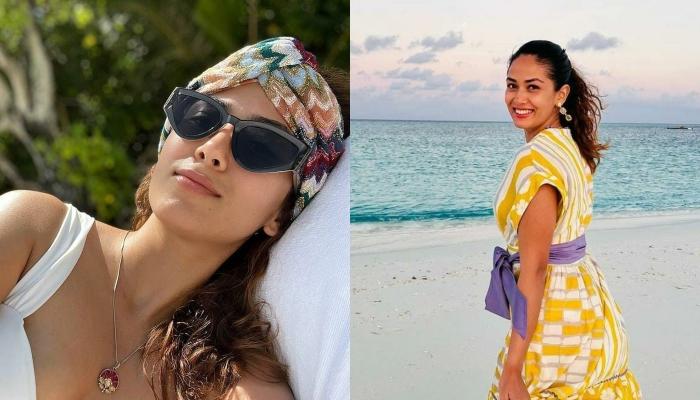 The Kapoor family had left for the Maldives for a vacation to spend some quality time together. During their stay in Maldives, the lovebirds had been very active on their social media handles and shared glimpses from their fun-filled vacation. And once again, Mira Rajput has shared a sassy video which she had shot in the Maldives.

Suggested Read: Elli AvrRam Shares Her Memories Of When She Completed Her Ad Shoot After Her Brother Collapsed

In a recent IG post, Mira Rajput Kapoor shared a video of herself, in which she can be seen wearing white bohemian-style crochet pants, which she revealed she had brought on her honeymoon. She had paired it with an oversized white shirt and had casually left her hair open.

Along with the video post, Mira penned down a short note on how she is still able to fit into her honeymoon pants even after 6 years. Her caption can be read as:

“Just pull it together A shirt that I’ve worn countless times through all my sizes and the pants I bought on honeymoon that never again fit till this gorgeous day on the beach.(And an overpriced bikini I deeply regret) I’m going on a shopping-stall (and NOT a haul) till I haven’t gone through my wardrobe well. It’s so much more fun share your #shoppingstall outfits with me.“

One of Mira’s fans did not like her outfit and commented, “Bad outfit”, another fan said, “We Indians, Gallery me kapde sukhana nahi chodte”. A fan also called her “Queen”, while many others flooded the comment section with a heart emoticon.

On October 26, 2021, Mira Rajput Kapoor had taken to her IG handle and shared a picture of herself sitting on a window. She had donned a hippie style orange dress. Along with the picture she had written, “Seek the light”.