Rajkummar Rao And Patralekhaa Are Getting Married In November 2021? Wedding Dates Are Out

Bollywood's cutest couple, Rajkummar Rao and Patralekhaa are reportedly all set the knot in November 2021. The alleged wedding dates of the couple's marriage are out! 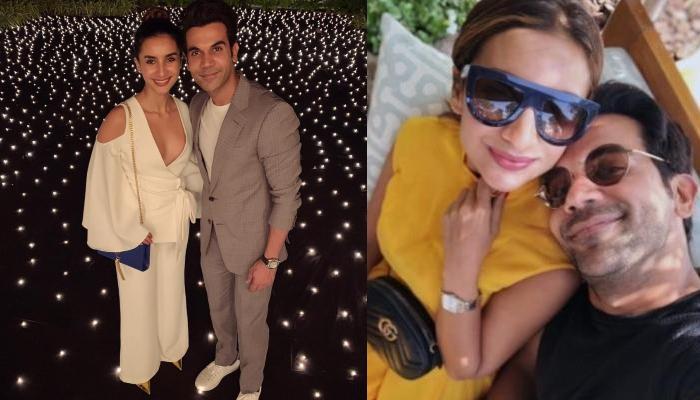 One of the most talented duos of the Bollywood industry, Rajkummar Rao and his actress-girlfriend, Patralekhaa, have been in a relationship for almost a decade now. Giving major couple goals, the two actors had gone through many ups and downs in their careers and personal lives but have never left each other's side even for once.

After being featured as a couple in the film, CityLights, Rajkummar Rao and Patralekhaa had also worked together in the web series, Bose: Dead/Alive. And there are chances that we will get to see this adorable couple reuniting on-screen in the near future. However, as for now, their wedding rumours are once again in the news after a major scoop about them has surfaced in the media.

According to a report in ETimes, Rajkummar Rao and his girlfriend, Patralekhaa, are reportedly getting married in November 2021. As per the report, Rajkummar and Patralekhaa are all set to tie the knot this year. Also, it is rumoured that November 10-11-12 are the dates when the two would take the plunge.

Going further in the report, it is also suggested that Rajkummar Rao and Patralekhaa's marriage would be an intimate one. There are also rumours that some of their close friends have already been invited. Thus, both Rajkummar and Patralekhaa are reportedly going for an intimate wedding ceremony.

Don't Miss: Kajal Aggarwal And Gautam's 1st Anniversary: Former Says She Is The Best Thing Happened To Him

On Rajkummar Rao's 36th birthday on August 31, 2020, the doting girlfriend, Patralekhaa, had penned a heartfelt wish for 'the golden boy with a beautiful heart'. Referring to the viral 'Rasode Mein Kaun Tha' twist in her birthday wish for him, Patralekhaa had shared throwback solo pictures of the birthday boy. Alongside the pictures, she had written, "Happy birthday to the golden boy with a beautiful heart. Thank you for telling me #Rasodemeinkauntha #happybirthdayrajkummarrao."

In an old interview with the Hindustan Times, Rajkummar Rao had talked about his marriage prospects with his longtime girlfriend, Patralekhaa and had shared how people often mistake him for being married to her. Addressing their wedding reports, Rajkummar had said:

"There are so many things that we read about [ourselves]. A lot of people think that we are married. But all I want to say is that we are single and happily in a relationship. Reports keep coming up about how we were fighting outside the gym or indulging in PDA... but we never respond to them. After a while, you stop reacting to these [rumours]. We know the truth. As long as we're happy, we don't need to tell anyone anything."

On the professional front, Rajkummar Rao will be next seen in the film, Hum Do Hamare Do.