In the viral clip, Rakhi Sawant is seen giving a quick kiss to veteran star Prem Chopra’s fractured hand to ‘heal’ it. 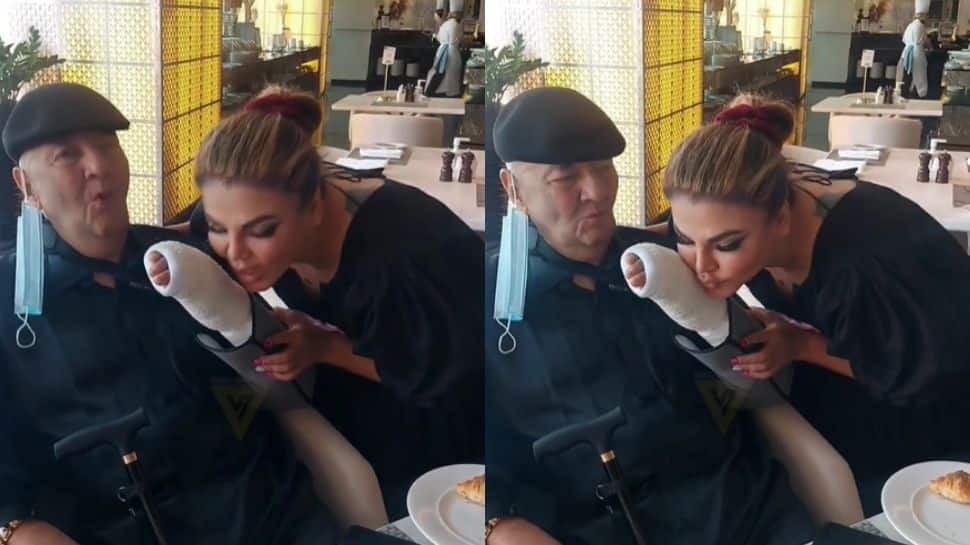 New Delhi: Actress Rakhi Sawant's latest video alongside veteran star Prem Chopra has gone viral on the internet and it is too adorable to miss. The diva, who is currently in Dubai for Filmfare Middle East Achievers Night 2021, had a cute interaction with renowned star Prem Chopra.

In a video shared by ace photographer Viral Bhayani, Rakhi Sawant is seen giving a kiss to the cast around Prem Chopra's fractured hand. The veteran actor had injured his hand a few days ago.

In the clip, Rakhi and actor Ranjeet and his wife were seen trying to cheer the veteran actor amid his injury. Ranjeet's wife suggested Rakhi kiss Prem Chopra's cast to heal his injury so the actress proceeded to give a small peck to his injured hand.

Take a look at the adorable video here:

The Filmfare Middle East Awards took place in Dubai on Thursday, October 28, 2021. Many Pakistani and Indian actors were seen in attendance. From Kajol, Nawazuddin Siddiqui, Nora Fatehi, Rakhi Sawant to Mahira Khan, Sajal Aly and Ahad Raza Mir - all were seen dressed to their best at the dazzling event.

Rakhi Sawant has shared several pictures from the event and seemed to have enjoyed it to the fullest. Take a look at her posts:

On the work front, Rakhi Sawant was last seen on the controversial reality TV show 'Bigg Boss 14' and even though she had reached the finals, she decided to opt from the race for a prize of Rs 14 lakhs.

Prior to that, she had played a leading role in the thriller film 'Ek Kahani Julie Ki' and made a guest appearance in the show 'Bhaag Bakool Bhaag'.