'Bigg Boss 15' host, Salman Khan, indulged in a cute 'qubool hain' moment with his alleged ex-ladylove, Katrina Kaif, and it left the actor's massive fanbase in tears. Details inside! 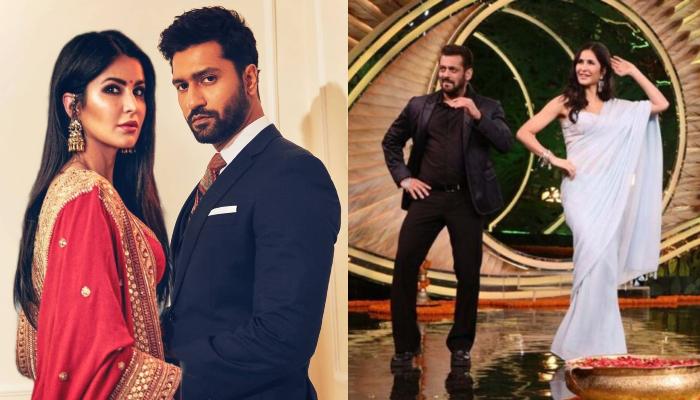 The whole Indian film industry is aware of the fact that Bollywood superstar, Salman Khan shares a great camaraderie with his alleged ex-girlfriend, Katrina Kaif. They're often spotted together at events, parties and festivals. Salman and Katrina had broken up a long time ago, but they share a beautiful bond with not just each other but their respective families also. The alleged ex-couple is an exemplar of how even ex-lovers can be great friends.

However, according to a report by ETimes, the Uddham Singh actor, Vicky Kaushal and Tiger Zinda Hain actress, Katrina Kaif will exchange the wedding vows at a destination wedding in Rajasthan which is scheduled to be held in the first week of December. Amid their wedding reports in the media, Katrina's recent visit on the sets of her alleged ex-boyfriend, Salman Khan's show, Bigg Boss 15, has left his entire fanbase in meltdown.

Recommended Read: Rajkummar Rao And Patralekhaa Are Getting Married In November 2021? Wedding Dates Are Out

The promo video of Bigg Boss 15's upcoming episode, Weekend Ka Vaar, featured the show's host, Salman Khan, welcoming the prominent director, Rohit Shetty and gorgeous actress, Katrina Kaif. During their visit on the sets, Salman and Katrina got indulged in a cute interrogation session. From accusing Salman of coming late on the sets to telling him to sing a song for her, the lovely banter between the two alleged ex-lovers left the internet in meltdown. Amid Katrina's wedding rumours with Vicky Kaushal, her mushy 'qubool hain' moment with Salman has left everyone in awe of these two alleged lovebirds.

Apart from their lovely banter on the show, Bigg Boss 15, it is Katrina Kaif's look that is winning everyone's hearts. The Sooryavanshi actress looked breathtakingly beautiful in a blue saree with minimal makeup. Everything about Katrina's look speaks volumes about her fashion and style quotient, from her defined eyes with smokey kajal in raven hue with ultra-black mascara to her sizzling lips courtesy of Matte lipstick in Snapshot.

Well, the reports of Katrina Kaif and Vicky Kaushal's engagement has excited their fans as they soon had started congratulating the couple and hoping for the reports to be true. While one user had written, "Congratulations katvic," another one had commented, "I hope this is true." Some people had even dragged Katrina's alleged ex-boyfriend, Salman in the comments section. Another user had commented, "Salman bhai be dil se bura lagta hain bhai," other one wrote, "Selmon bhai is ready with his car."

For the unversed, Katrina Kaif and Vicky Kaushal are expected to tie the knot soon. On July 16, 2021, Katrina had turned a year older, and her alleged ex-boyfriend, Salman Khan's stylist, Ashley Rebello's wish for her, had sparked off her wedding rumours. To wish her, Ashley had taken to his IG stories and had shared a picture of Katrina in bridal attire.

Also Read: Kajal Aggarwal And Gautam's 1st Anniversary: Former Says She Is The Best Thing Happened To Him

On the professional front, Katrina Kaif will be next seen in the film, Sooryavanshi.